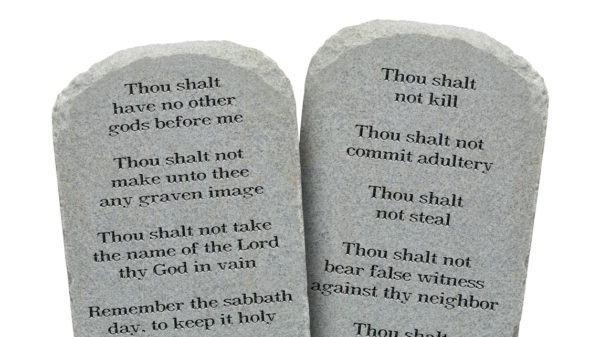 In some recent interaction with Presbyterians I again encountered the claim that it is a violation of the first commandment to reject the trinitarian doctrine that God is three persons in favor of the ‘unitarian’ doctrine that the one God is only one person, the Father of the Lord Jesus Christ. It’s an odd charge, in my opinion, because the text of the first commandment seems to obviously present God as a single person:

Then God spoke all these words, saying,

2 “I am the LORD your God, who brought you out of the land of Egypt, out of the house of slavery.

3 “You shall have no other gods before Me.

I just want to make a few brief observations here. Firstly, we may note that “God” in this passage is clearly a title indicating a relation, not an essence. The LORD is said to be Israel’s God in verse two; if this refers to an essence or nature, it makes no sense, but if ‘God’ is a title signifying dominion, this fits perfectly. After all, what would it mean exactly for YHVH to be Israel’s divine essence? Does Israel possess a divine nature, so that Israel consubstantial with the Trinity? Or is Israel God incarnate? The Bible has no concept of God as an essence, but rather applies ‘God’ as a title which, as the titles ‘lord’ and ‘king’, denotes dominion, power, and authority. With this meaning in mind there is nothing enigmatic about YHVH being Israel’s God; YHVH is not making an ontological claim about an essence, but declaring Himself to have authority, power, and dominion over His people Israel by being their God.

This also removes the mystery of verse three; for if ‘God’ here is an essence (as the trinitarians must think), and there is only one such divine essence, then the command of verse three is oddly put, at best. To have no other ‘divine essences’, which do not exist, before the one divine essence that is predicated of Israel, is an odd and practically unintelligible commandment. But if we understand that ‘godhood’ is dominion, and that there were on account of dominion and authority many lesser beings called ‘gods’ (Hebrew ‘elohim’, ‘mighty ones’), including both men and angels (Ps 82, compare Jn 10:34; Ps 8:5, compare Heb 2:7,9), then the command to put no other god ahead of YHVH is not so strange at all. In fact, this verse assumes that there are other beings, creatures of YHVH, that can justly bear the title ‘elohim’/’god’, and that YHVH, as being absolutely supreme over them all as the “Most High God” and “God of gods” is to be infinitely preferred above all others. While honor may be given to other ‘gods’ -human rulers and kings, and even to angels- the Almighty God, YHVH, the God of Israel, is to honored, loved, served, and worshipped above all others, with all the heart, mind, and soul (Mk 12:29-30).

Secondly, I’d like to note that YHVH the one God of Israel, the God of gods, can be clearly seen to be only one person here. Scripture doesn’t leave us guessing on how many persons YHVH is: in verse two, we read that YHVH is an “I”, a “Who”, and in verse three, a “Me”. These singular personal pronouns denote a single person in very clear terms. But note what else we can see about YHVH, just from these three short verses: YHVH is a living being, Who brought this nation He is now speaking to out of slavery in Egypt. He is no abstract essence, no lifeless principle or mere idea, but a living individual being, able to act and save His people. We also see that this being is a rational being: He speaks and acts intelligently; indeed, His wisdom is far beyond man’s comprehension. For our purposes here, it’s important to note: YHVH is here portrayed as a single rational individual being; that’s precisely what a “person” is by definition. That’s just the standard philosophical definition of a person, what the word ‘person’ means and has meant for centuries. A person is a rational individual being: and YHVH, the God of the Bible, the God of Israel before Whom we are to have no other gods, is one such rational individual being: a single person.

That conclusion is of course precisely what unitarians believe and have been endeavoring to help people to see from the scriptures. For trinitarians, on the other hand, this is quite a mess. Where is God’s triunity? Why does God imply only one person Who is the supreme object of worship and devotion, if indeed there are three worthy of equally supreme devotion? How can the one God be one person, as He is clearly presented as here, if He is actually three? Why isn’t ‘God’ here, which is being used in reference to the one God, referring to an essence like the creeds say it is supposed to? Perhaps one will also wonder why, in so beautifully revealing Himself to the people He had chosen and redeemed for Himself, God didn’t choose to show them His triunity? Why did God leave His people in darkness about His identity? Why leave them with the misapprehension that He is only one person, if He is really three?

The Westminster Larger Catechism, commenting on the first commandment, finds many possible violations of it, among which are these:

We must wonder, in light of this, at the peril the wording of this commandment itself must then have placed God’s people in; for (in the Presbyterian interpretation) while forbidding them that it is a grave sin to misapprehend or misunderstand their God, or to be ignorant of Him, the commandment itself furnishes them with (to the trinitarian) a misleading notion of God’s identity, such that can only leave them confused, ignorant of God’s true identity, and entertaining false and mistaken opinions concerning Him; for the whole lot of these Israelites, if they simply believed what was spoken to them in a straightforward manner, were positively unitarians, and comprehended their God YHVH to be a single rational individual being, that is, one person. But if, as the trinitarians hold, God is in fact three persons, then the command itself must represent, according to their strict interpretation if it, a sort of sinister trap, whereby God will at once trick His people into a false view of Him by speaking as if He is a single person, while at the same time forbidding thinking such as a grave sin of “ignorance”, “misapprehension”, and “false opinions”.

While the trinitarian must wrestle with why God would not only mislead His people into thinking falsely about Him, but also at the same time make it a grave sin to so think falsely about Him, unitarians are able to simply affirm the plain reading of the passage we noted above. If believing the straightforward teaching of scripture that the Lord God Almighty is one person is the sin of ‘misapprehension and false opinions’, we latter-day unitarians find ourselves in good company in committing it, seeing as not one of the prophets or apostles, nor the Lord Jesus Christ himself, can be found innocent of it, all of them having been duped, apparently, by God’s sneaky way of presenting Himself as though He is a single person when in fact He is not. The shema has deceived us all; from Moses, to David, to Jesus, to Paul and Peter, no one until Augustine and his trinitarian comrades in the late fourth century were clever enough to see through the misty statements of scripture with the clarity to discern the indefinable mystery that God is not a single person, but three of persons in one individual God.

All jesting aside, there is indeed serious misapprehension and ignorance of the true God afoot here; but this cannot be said to be on the part of those who, holding the scriptures in high esteem, refuse to trade the clear revelation of God that He is one person for the traditions and doctrines of men saying that He is three. We must take our stand not on the creeds of catholicism, but on the confession of our Lord, that this is eternal life: to know his Father, the only true God, and Jesus Christ whom He has sent (Jn 17:3).

“We must obey God rather than men.”

“Test all things; hold fast what is good.”

Jesus answered [the Jews], “If I glorify Myself, My glory is nothing; it is My Father who glorifies Me, of whom you say, ‘He is our God’;

For there is one God, and one mediator also between God and men, the man Christ Jesus,

The Rule of Faith

We believe in one God, the Father Almighty, Maker of heaven and earth and of all things visible and invisible;

And in the man Jesus Christ, His only-begotten Son, our Lord, Who was crucified, died for our sins, and was buried, and on the third day rose again from the dead; Who ascended into heaven, and sits at the right hand of God, the Father Almighty, from which He shall come to judge the living and the dead;

And in the Holy Spirit;

And in the resurrection of the flesh, eternal judgement, the kingdom of God and Christ, and the forgiveness of sins through Jesus Christ. Amen.